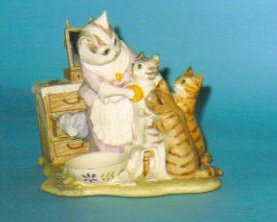 May I introduce myself?

I am Tabitha Twitchit and I am proud that the variant spelling of the name is unique to my family.  I was named after a much earlier Tabitha Twitchit, who was buried beside the porch of the church at Hawkedon, near Clare, in Suffolk.  (A very beautiful part of the English countryside),

My immediate family is small in number, as you shall see, so I set about some genealogical research, but was not very successful.  I soon gave up.  I did, however, find some more Tabitha Twitchits in earlier times, so I noted these in case a link becomes apparent later.  One Tabitha T. died when only one year old at Isleham in Cambridgeshire.  That was in 1839.  Another Tabitha T. was baptised at Stradishall in Suffolk in February 1804.  She married a Jonathan Suttle in September 1825 and presumably died soon afterwards, for husband Jonathan married her sister Charlotte in October 1827.  It was then illegal to marry a deceased wife’s sister, but perhaps it was OK for a girl to marry a deceased sister’s husband!!!  Stradishall is not very far from Hawkedon, so perhaps it is that Tabitha whose name I carry on.

My relatives today are rather thinly spread.  I have a cousin living nearby; a Mrs. Ribstone Pippin and the apple of her eye is a little Pomeranian dog called Duchess.  There is also, somewhere, a granny called Squintina, who is rarely mentioned.  So cousin Ribby is my only true family.

I live with my youngsters, who I raise alone, being, sad to tell, an unmarried mother; we are, in modern vernacular, a single parent family.  My eldest is Tom Kitten, and his younger sisters are Miss Moppit and Mittens.  They are very naughty.  Tom in particular could do with the presence of a father.  He is in the habit of undressing himself in the street and coming home without his clothes.  Did I say, “In the habit?” Out of the habit might be more appropriate.  The girls hide themselves and cause me no end of worry.

I never knew their father.  It is very dark at night in country locations, and he approached me from behind, so I did not even see him.  I did once hear his landlady call him Tom so I named my eldest son Tom after him.  I believe that it is usual in Twitchett families for the forename to be repeated on different generations, so I am upholding that tradition.  I suppose it is obvious really; that my young Tom Kitten would be sired by an old Tom cat.