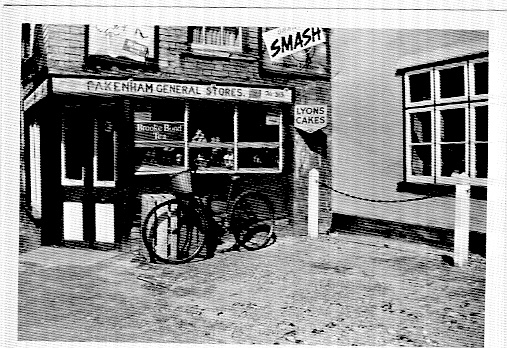 It stood, protruding towards the street, next door to ‘The Bell’. It had one large window facing the street and another of half size at right angles to the inn. This was ‘our’ window’ for standing on a low wooden edge we could grasp its rim, pull ourselves up and look longingly at the wonderful array of confectioneries displayed in cardboard boxes. There were ‘Jelly Boys’ toffees, sticks of liquorice, sherbet dabs, ‘What O’s’, reading sweets, fruit drops, liquorice allsorts, imitation cigarettes, small bars of plain chocolate, indeed the assortment varied each week! A farthing or a halfpenny sufficed to buy one of these tiny delicious morsels. We managed to get a farthing or halfpenny once a week. Imagine the trade on Monday morning before 140 children went into school and imagine the sad faces of the luckless ones who had not been fortunate enough to be given farthings at the weekend!

You stepped down into the shop through its door built across at an angle between the two windows. The floor of the shop was often flooded when storm water cascaded down Church Hill.

On a shelf across the middle front window was a line of picturesque biscuit tins from which biscuits were served in paper bags. A ‘hap’oth’ of broken biscuits was a good meal for any child who had too far to walk home to dinner. On the floor of the window were bars of soap, boxes of Quaker Oats and boxes of Robin Starch. Notices of village events were displayed in this window. The Nose Club notices were always headed up:-

PLEASE NOTICE THIS NOTICE IS UP.

The glass case on the counter displayed joints of bacon, from which thin slices were cut by hand. Its also contained pork as the proprietor was also a Pork Butcher. In another glass case on the other counter were packets of lard, dripping and fresh dairy butter from farms in Hessett and Thurston. In short, in the days before easy transport to Bury, the little shop supplied almost every want of the villager. Not the least of these was patent medicines. The thought of Doctor’s bills drove many a man and woman into the shop for the two most popular remedies.  “Tinch of Rubub, Arthur, bor” the customer would say when he wanted ‘tincture of rhubarb’ for stomach ailments; or ”Friar’s Balsam, bor,” the common remedy for colds and chills.

It was said of the late Mr. Arthur Twitchett, the owner of the shop that he had brought up many poor families in the village. He was a genial, quiet, tender-hearted man, who could never brush aside a tale of woe or use severe action to recover debts. His service as a church sidesman for over fifty years testifies to his character.